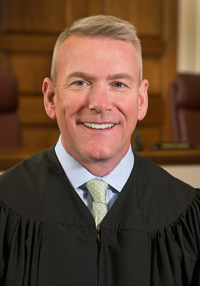 Patrick E. Donovan is the 109 th Associate Justice of the New Hampshire Supreme Court.  Following his unanimous confirmation by the Executive Council, he was sworn in by Governor Christopher T. Sununu on May 8, 2018. He serves as the Chairman of the Court’s Advisory Rules Committee.

Justice Donovan has the unique distinction of starting his legal career at the Supreme Court as a law clerk in 1990. He joins the court from his private practice in Salem, New Hampshire where, for 18 years, he focused on civil, commercial and criminal matters.  Prior to opening his own firm, Donovan worked as an associate at Goodwin Proctor in Boston then became an Assistant Attorney General with the New Hampshire Department of Justice in the Criminal Bureau. After three years, he was promoted to Senior Assistant Attorney General as a member of the Homicide Unit. He also served as Counsel to the New Hampshire House of Representatives for two years.

Donovan is a 1990 graduate of Boston College Law School where he served as an editor of the Boston College Environmental Affairs Law Review. He earned his undergraduate degree in Government and English from Dartmouth College in 1986. During college, Justice Donovan interned at the White House, played varsity football, and was selected to serve on several honor societies and leadership organizations, such as Green Key and Palaeopitus.

Patrick was born in Baltimore, Maryland, then moved to Salem, New Hampshire, at age 12. Donovan was known as a leader and an outstanding student-athlete at Salem High School, he captained the 1982 New Hampshire Maple Sugar Shrine Bowl Team in its victory over Vermont. He is committed to public service and has proudly served on several charitable boards, including the Boys & Girls Club of Greater Salem where he is currently on the Board of Governors and previously served as Vice President and President of the Board.  Justice Donovan is also a Board Member with the Warren B. Rudman Center for Justice, Leadership & Public Service.

Justice Donovan and his wife Monique, who is also an attorney, have four children.