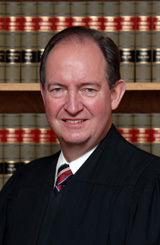 The Honorable Gary E. Hicks was sworn in as the 104th Justice of the New Hampshire Supreme Court on January 31, 2006 after serving for four years on the Superior Court, the state's major trial court. Before becoming a judge, Justice Hicks was a commercial litigator for 23 years with Wiggin & Nourie, then one of New Hampshire's largest law firms. During that time, he also maintained an active mediation and arbitration practice.

A native of Colebrook, New Hampshire in the state's rural North Country, Justice Hicks graduated from Bucknell University with a degree in mathematics and from Boston University School of Law where he was managing editor of the Law Review.
Justice Hicks is co-editor of the New Hampshire Discovery Practice manual published in April 2011 by Massachusetts Continuing Legal Education (MCLE).

Senior Associate Justice Hicks is a current member of the Advisory Board of the St. Paul's School Advance Studies Program in Concord, New Hampshire. He is actively engaged in recruiting private and public school students from diverse and multicultural backgrounds to consider a career in the legal profession in New Hampshire. He also co-teaches a class in professionalism at a variety of law schools, including Tulane University School of Law.

Senior Associate Justice Gary Hicks was presented with the 2021 Civil Justice Award by the New Hampshire Access to Justice Commission on June 3, 2021 in recognition of his devotion to the ideals of promoting the administration of justice for the public good, as well as improving and preserving the American civil justice system, particularly during the COVID-19 pandemic. In 2015, Justice Hicks was named a Life Fellow of the American Bar Foundation for his exemplary dedication to the profession and for his support of the ideals and objectives of the American Bar Association. That same year, Justice Hicks also received the Manchester Bar Association's "Distinguished Service Award" in recognition of his outstanding personal achievements and contributions to the bar. He has received both the New Hampshire Bar President's Award for distinguished and compassionate service (1988) and the Philip S. Hollman Gender Equality Award presented by the Bar's Gender Equality Committee (2012). A former chairperson of the board of the New Hampshire Institute of Art, Justice Hicks was bestowed with an honorary Bachelor of Fine Arts degree in 2000. Justice Hicks is also an honorary member of the International Society of Barristers.

Read Judge Hicks remarks after he was sworn in by Gov. Lynch.