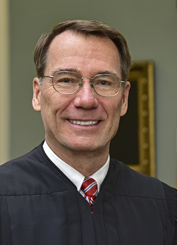 Associate Justice James P. Bassett spent more than 27 years as a trial and appellate lawyer in New Hampshire, specializing in complex commercial and civil litigation, First Amendment issues and land use cases. He was nominated to the Supreme Court by Governor John Lynch and, following confirmation by the Executive Council, Justice Bassett was sworn in as the 107th member of the court on July 19, 2012.

A graduate of Dartmouth College and the University of Virginia Law School, Justice Bassett took an active role in many non-profit organizations before he came to the bench, including the United Way of Merrimack County, where he was a volunteer for 25 years and served as chairman of the annual campaign in 2009. He was also a long-time member of the Board of Trustees of the Capitol Center for the Arts, served on the board of the Friends of the Norris Cotton Cancer Center and was an appointed member of both the state Rivers Management Advisory Committee and legislative Shoreline Study Committee. He also served on the Leadership Council of the Campaign for Legal Services.

July 19, 2012: Remarks after taking the oath as Associate Justice
May 18, 2012: Statement to the Executive Council